You are here: Home / Who / Domain Name: Coincidence or Luck?

Domain Name: Coincidence or Luck since my Unusual Bird Name was Taken

Being heavily involved on the Internet I had put up a new Bird Quote website around 2013. It was initially just to have a site on the internet about birds.

It had a great domain name reflecting the content of the site, something difficult to do nowadays with most of the good relevant domain names already taken. I had another 4-letter domain name that was the name of a bird so I had thoughts about using another bird sight to promote it.

I Needed an Administrator Name for My Bird Quote Site

Rusty Blackbird is a real bird and a good symbol that represents both me and the website. I checked to see if the domain name was available knowing it was so unusual that it would surely be available to register as a domain name.

Wrong! It was taken. My luck was stone cold. I couldn’t imagine who might register that domain name. However, the first thing that came to mind after reeling back in shock, was that some bird enthusiast probably owned it.

I had just spent a lot of time and deliberation picking that name. It was to be used as the administrator name. However, I planned to make it a companion website to help promote www.BirdQuote.com. Now it looked like I wouldn’t be able to do that.


What to do about my planned domain name that was taken?

What to do? I felt I had spent too much time and planning to give up so easily. I checked to see who the owner of the domain name was. Who could possibly have a domain name like that?

When I checked to see who owned it, lo and behold, I recognized the unusual name of the registered owner.

Out of the millions of domain owners, the name I wanted was registered to someone I had met several months earlier at a bird show in San Diego. At least I assumed it was him, Sam Crowe. If it was the Sam I had met earlier that year we had spent several hours over two days talking about all sorts of things, including birds.

I didn’t know he had any domain names, but knew he had several websites, mostly related to birds.

Good domain names that are relevant, short, easy to spell and pronounce are very difficult to come by nowadays. Most are already taken. But then again, some people are lucky and get a nice, short and/or easy-to-remember domain name. Here are a few examples a few of mine, some are for sale. UiiR.com     Yolky.com     X-Bid.com     Travellistics.com     BirdQuote.com     LKVA.com     AfricanSafariPhotos.com     DomainSam.com

By Sheer Coincidence I knew the Domain Owner

After seeing Sam’s name I quickly wrote up a proposal for me to buy his domain name, if indeed it was the Sam I knew. Off it went by email. I waited a few days, but no answer or email from him.

Then the next day my bounced email came back indicating no such email address. Usually an email bounces right away, but not in that case. I double checked. I had sent it to the email address on record.

Now I was feeling a little sick in the stomach. I thought maybe I had hit the jackpot, but instead my email went into file 13, the waste can. Now I really wanted that domain name. Given up so easily was not my style. That’s just not me.

I racked my mind and tried to remember our conversations. I knew Sam had a lot of websites, but didn’t remember the names of them. After some deliberation it hit me. Yes, I vaguely remembered one of his websites, only one, but that was enough. I quickly recovered the scrapped email from file thirteen and resent it to the contact email on the website I remembered.

Bingo. It not only arrived to the destination, I struck gold! Not only was the domain his, but he offered to sell it to me for exactly the same amount I offered him.

And to make matters even better, he offered to buy it back for the same price if I decided not to use it. Was that coincidence or luck, or What? 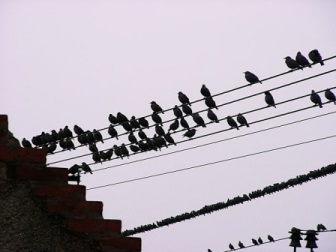 I couldn’t have gotten a better deal than that. Good Luck was on my side that time. As it turned out, I kept up the site for a little over two years updating mostly sightings of Rusty Blackbirds.

But it was a real job finding data on such sightings and editing out all the unnecessary data that came along with the sightings. Most of the data I got was from bulletin boards and Yahoo Groups and each had a lot of data when Rusty Blackbirds took their summer flights south and returned back north after winter.

So lately I haven’t done anything with the site. I really need to find a bird enthusiast who would be interested in keeping the site updated. Maybe twice a year during the birds migration seasons.
Note: I took the site down a few years ago because I just didn’t have time to maintain it.

If you want to see what a Rusty Blackbird is all about then visit my website at http://BirdQuote.com. Rusty has been rather rusty lately so ignore the look of the site and dates.

If you know anyone interested in keeping my Bird Quote site updated by adding more bird quotes contact me on the contact form. Since the site is not making any money I cannot afford to pay anyone to update it with more bird quotes.

However, if there is a bird enthusiast interested in promoting the site through social marketing maybe we could make a deal. You promote the site so it gets enough traffic to make money and we could split any profit.

Go there to BirdQuote.com. If you like the site or want me to revive it then contact me about it.