African Safari Adventures on the Ground and in the Air

Seeing wildlife up close and personal and in their own habitat is hard to beat. It’s a lot different from visiting the local zoo.

At one time African Safaris were reserved for the wealthy and rich, but times have changed over the years. African safari vacations are now such that ordinary people can afford them since prices range the gamut from bargain safaris to ultra-deluxe safaris with the expected sky high costs.

But to have a world of fun and maybe even better experiences than many who have money to throw around, you don’t have to pay an arm and a leg.

You can experience the great adventure of an African safari at a price many vacationers can afford and might otherwise spend on a typical vacation here is the USA or close by.

Safaris have become very popular and there are numerous companies that provide African safari packages and tours designed to bring a bit of adventure under expert supervision.

Accommodations are usually in lodges and camps, equipped with hot showers. Meals and barbecues are prepared by the company cook.

Many countries in Africa offer safaris. They include Kenya, South Africa, Uganda, Rwanda, Tanzania, and many more. You can find safari tours from a few thousand dollars USD to ten, fifteen, twenty thousand dollars and more.

These prices will fit most people who want an exciting adventure and not just an ordinary vacation.

Kenya is one of the main destinations for this type of vacation. So is Tanzania, and if you visit Tanzania be sure to visit Zanzibar Island for a beach holiday which could be combined with an African safari.

The country has many National Parks and game reserves. One of the most spectacular is the Kimana Game Sanctuary, which is located at the foot of Mount Kilimanjaro.

This may not be included in safaris, but may be a place you want to see even if you are not climbing Mount Kilimanjaro.

Rich rain forest is the terrain at the Mount Kenya National Park and stretching plains dominate the Masai Mara.

In most safaris, guides drive parties in 4×4 vehicles or in open safari vehicles. Sometimes, they travel in mini buses. For an aerial view of the landscape, there are fly/drive packages, using small, and light aircraft.

South Africa is another beautiful country, teeming with wild animals. An African safari here offers a great variety of landscape.

That includes wetlands, semi-desert, open grassland and old forest. The Phinda region is popular and can be explored on foot, by vehicle or light aircraft.

Some parties are taken by boat on the waterways. Wildlife sighted here is likely to be lions, rhinos, elephants, buffalo and leopard. The Madikwe Game Reserve contains leopards, elephants and packs of hyenas and wild dogs.

Rwanda is famous for its mountain gorillas and there is said to be 350 of them in the tree lined slopes of the Parc National des Volcans.

Be prepared for a long trek if you want to see them. The Uganda and Rwanda region, with its volcanoes, falls, lakes and forests is another treasured area and offers the best chance of seeing gorillas in their natural surroundings.

To see the gorillas in the Bwindi Impenetrable Forest or at the Mgahinga Volcanoes, parties are taken on foot through the tropical rainforest, which is home to many different species of birds.

The Murchisson Falls National Park can be reached by boat on the River Nile. The waterfall is impressive and the animals in the area include warthogs, zebras and baboons.

All this is great in itself, but I’ve got a secret to tell which will make you think twice about taking one of these usually “canned” safaris.

For the same range of prices and often less, you can participate in a custom designed safari for a small intimate group. Take my word as one who has been on two of these unique African safaris, you’ll not regret it. This is where you will get the most bang for the buck.

When considering an African safari, money is not the only consideration. You need to have a good, well experienced travel agent arrange everything for you.

Even better, a travel agent who will not only make all the arrangements, but accompany you on the actual safari is by far the better deal, regardless of the money spent.

You need to contact an agent with extensive experience in arranging African safaris and actually going with the tourists on the safari.

These are hard to find, but that’s the way to go. Little did I know that I would actually be able to afford such a preferred way to experience a safari. 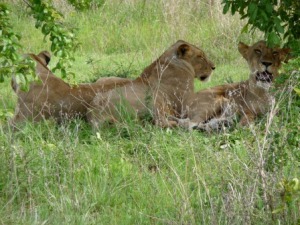 But it’s true, as I found out from Safari Kay of Destined To Travel She usually takes several such safaris a year to the various countries where safaris in Africa are held.

On the safari I went on, Kay arranged the whole trip, which included me and several friends and relatives. It’s a misnomer to say it was a single safari because it consisted of several parts, each a mini safari on its own.

It lasted over a period of about two weeks. We went to several different areas and also had a night safari, which many safari goers never get to experience.

In addition, we had decided we wanted the last few days to wind down and Kay arranged that too, in Zanzibar, where in addition to a relaxing time, we saw the old trading town there, bought goods from foreign merchants, and learned the fascinating story of its history.

On that particular safari in Tanzania she also arranged an additional, really neat balloon safari floating over the Serengeti.

We had a Birdseye view of the animals below – some running as they heard the whisper of the balloon’s heat jets and saw the shadow of the low flying balloon.

Not only that, we were fortunate enough to see four the big five, lion, leopard, elephant, rhino and buffalo.

Note that it’s not that easy to see all five of them on your first safari or even your second or third, particularly leopards, which are usually very difficult to spot.

This and many more great adventures await you on a custom safari arranged by Safari Kay. 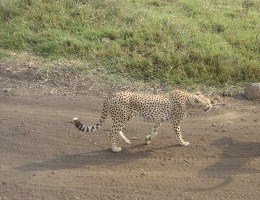 Kay made all the arrangements for our safari over the year or so after I decided to go. That gave me plenty of time to come up with the money and take my recommended vaccinations.

Contact Safari Kay for more information on a unique African safari where she can arrange a custom safari for you and a small group and will accompany you on that safari.

Charles is a senior citizen and a veteran of the internet.